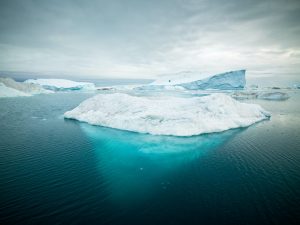 A diverse selection of Arctic experts released a study in the scientific journal Sustainability that holds up the Arctic as evidence of humanity’s “failure” to act on climate.

And while the Arctic might exemplify our failure to act on climate in a rapidly changing world, the Arctic also provides a vision for what rapid and successful climate action will need to look like.

The authors–experts in climate science and Indigenous Knowledge, including SEARCH co-principal investigator and Director of the Eskimo Walrus Commission Vera Kingeekuk Metcalf–are quick to remind us that we have half a decade to avoid stepping over an irreversible threshold.

Fortunately, that tipping point–when our global average temperature exceeds 1.5 degrees Celsius above pre-industrial temperatures–can be avoided through a number of actions.

These recommendations come as a follow up to the 2016 workshop organized by the Columbia Climate Center called “A 5C Arctic in a 2C World.” That workshop highlighted the Arctic’s role in the global climate as well as its faster pace of warming.

Five years after the workshop and now with as few as five more years to make meaningful changes to mitigate climate change, the authors of the study explain, “we need to reach net zero carbon emissions by the middle of this century. This means that we have only a decade left to cut emissions by half, which requires cutting emissions by ca. 7 to 8 percent each year starting now, i.e., in 2022.”

The authors conclude, “We are now in the decisive decade concerning the future we leave behind for the next generations. The Arctic’s future depends on global action, and in turn, the Arctic plays a critical role in the global future.”