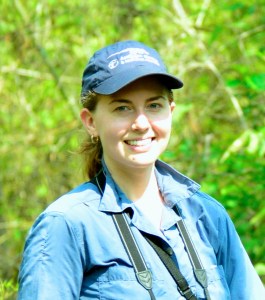 Mary E. Blair is the Director for Biodiversity Informatics Research and the Inaugural Rizavi Innovation in Conservation Fellow at the Center for Biodiversity and Conservation at the American Museum of Natural History. She leads an interdisciplinary research program on biodiversity informatics and environmental change and is interested in informing biodiversity conservation under climate change through the lens of a biocultural approach, which explicitly starts with and builds upon local values, knowledge, and needs while recognizing the interplay between the cultural and biological parts of a system.

Mary has expertise in developing machine learning-based models of species distributions and how they will shift under climate change, as well as in participatory mapping, social-ecological systems research, and genomics. Her research has been funded by prestigious awards from NASA and the National Science Foundation. Her blogs for the New York Times’ Scientist at Work and AMNH’s From the Field Series have reached a global audience, as have her social media broadcasts for AMNH on endangered species and climate change.

Mary is also a descendant of reindeer herding Sámi from Guovdageaidnu (Kautokeino), Norway and has many family members who still herd today on traditional Sápmi lands.