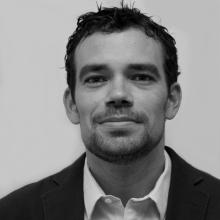 Dr. Matthew Druckenmiller earned his doctorate in 2011 from the University of Alaska Fairbanks where he combined geophysical monitoring with local knowledge to study how Iñupiat communities use and rely on a changing sea-ice environment. Matthew joined Rutgers University in summer 2015 to support the Sea Ice Action Team, however, is based at the National Snow and Ice Data Center (NSIDC) in Boulder, CO.

Previously, Matthew was a PACE (Postdocs Advancing Climate Expertise) Fellow at NSIDC where he collaborated with Alaska’s North Slope Borough to investigate the impacts of Arctic sea ice loss on bowhead whales. With long-held interests in science policy, he has served as a Science Policy Fellow at the National Academies’ Polar Research Board (2005), a project manager at the Arctic Research Consortium of the U.S. (2006), and a AAAS Science Policy Fellow at the U.S. Agency for International Development (2013-2015).

Originally from Trout Run, Pennsylvania, Matthew traces his appreciation for the Arctic back to his early years fishing small mountain streams with his father, grandfather, and brother.