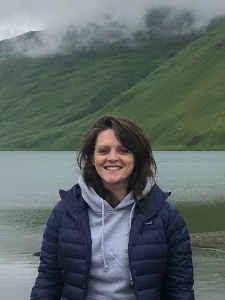 Chelsea Koch earned her Ph.D. in Marine Science at the University of Maryland Center for
Environmental Science. She studied food web dynamics in response to declining sea ice in Bering and Chukchi Seas as part of the Distributed Biological Observatory program in the Pacific Arctic. She advanced the ecological applications of unique ice algae and phytoplankton biomarkers to determine the important role sea ice plays in providing a high-value food source for Arctic food webs, focusing on benthic invertebrates and walruses. She has a strong interest in the co-production of knowledge to support food security for Indigenous peoples in the Arctic. Chelsea was also an advocate for early career ocean professionals in the Arctic research community, serving in leadership positions with the US Association of Polar Early Career Scientists and the US Interagency Arctic Research and Policy Committee.

She has also served in several polar and ocean science-related posts with the US government. She worked with the National Science Foundation’s US Antarctic Program coordinating marine research programs and supporting science operations aboard two icebreakers and marine biological research on the Western Antarctic Peninsula. Chelsea also supported oceanographic research, policy, and administration at the National Oceanic and Atmospheric Administration (NOAA) as a Sea Grant Fellow in 2014 and with the International Activities Office in 2015, primarily supporting US participation in the IOC, supporting capacity building initiatives and developing bilateral agreements. Chelsea also holds a Master’s Degree in Marine Science from the University of South Carolina with a research focus on coral reef response to sea level rise in the Caribbean and a Bachelor’s Degree in Environmental Science from the University of Mary Washington with research on trace metal contaminants in coastal lagoon-marsh ecosystems. Chelsea loves being in the field and has sailed on a number of research expeditions around the world, covering both poles and the tropics. She was also a NOAA Explorer-In-Training, where she was trained in ocean exploration technologies supporting hydrography and seafloor mapping.