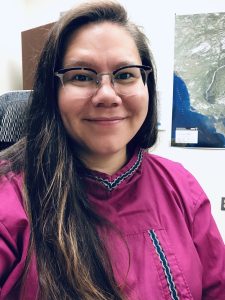 Maija Katak Lukin, Inupiaq, was born in Kotzebue and raised on the shores of Cape Krusenstern National Monument at Sisualik, Ak. She is the granddaughter of the late Doc and Katak Harris of Sisualik and Floyd and M. Hazel Johnson of Chickaloon, AK.